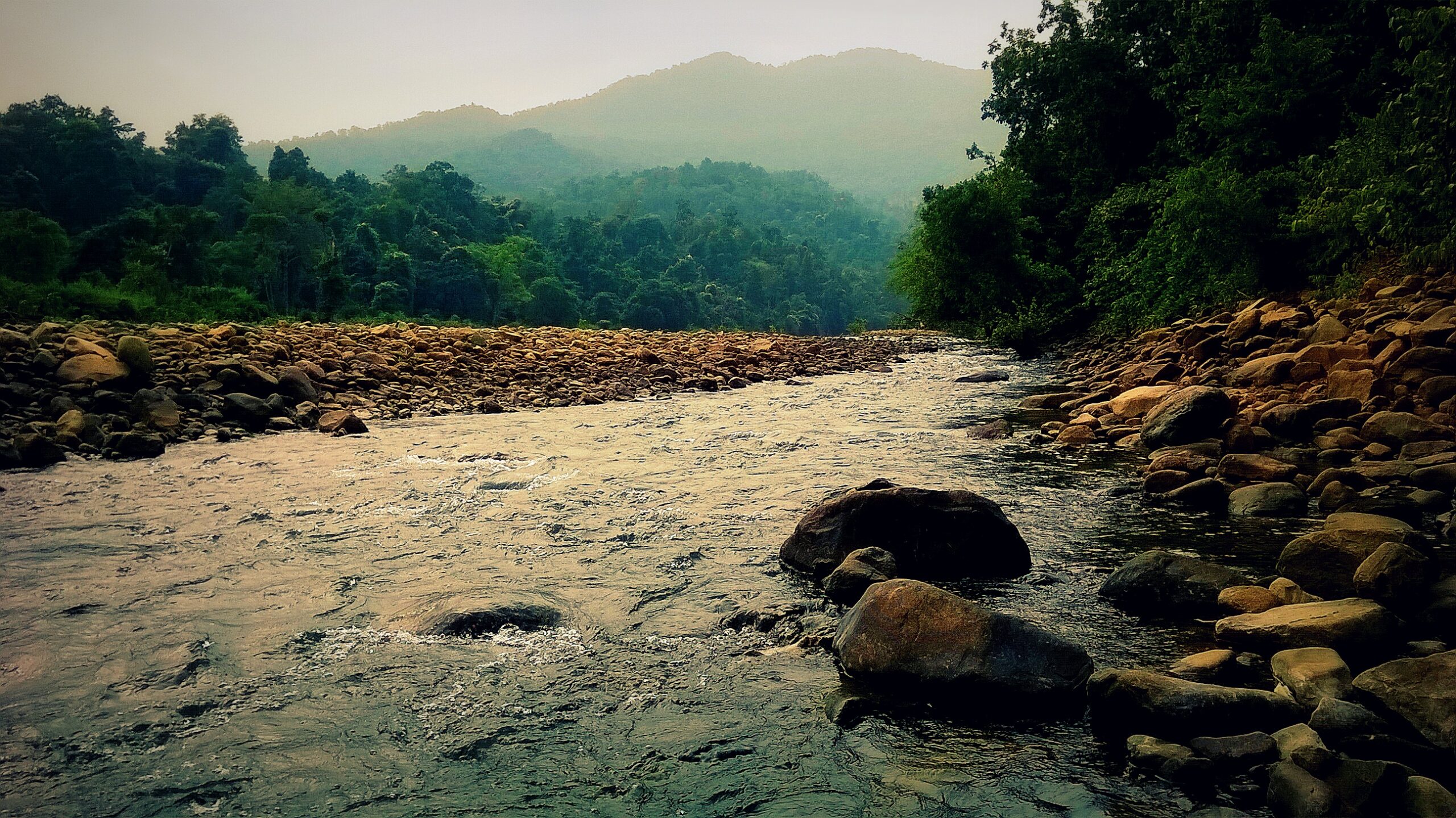 A picturesque and scenic town in Orissa in the area of Marurbhanj, Simlipal was once a hunting ground for the erstwhile rulers of Marurbhanj. The area is today being credited with the largest wildlife sanctuaries of India and is also considered as one of the main tiger project in India. Being derived from the name of the silk cotton tree which is locally called as Simul, the area of Simlipal is enriched with dense forests, striking meadows, startling waterfalls and mind blowing rivers and is positioned at a plateau with an elevation of 900 m.

The area of Simlipal reserve is gifted with great bio-diversity and ultimate varieties of faunas in the ranges with the ambience of cool breeze emerging out of the dense forests. The lushly ambience of Simlipal has been recognized as the perfect location for forest camping which is open for the tourists during the best season of Nov to mid- June.

Also known as Simlipal Elephant Reserve, it is a complete ecosystem with forest vegetation along with the adjoining Santhal tribal settlements. The total reserve area is accomplished with 2,750 sq kms (1,060 sq mi) at an average elevation of 559.31 meters (1,835.0 ft). However, the entire Simlipal area is undulating, rising from 600 meters (2,000 ft) to 1,500 meters (4,900 ft). The high hills of Simlipal surround Meghasani, the highest peak in the national park. Summers are very hot with temperatures around 40 °C (104 °F) whereas the temperature during winter months can be as low as 14 °C (57 °F). the average rainfall can be witnessed from the ranges of moderate to heavy.

This National Park is also home to a large number of reptiles including snakes and turtles. The other attractions of the Simlipal National Park are Mugger crocodiles at Jashipur apart from Barehipani and Joranda waterfalls.

Simlipal Reserve is a treasure house of 1076 species of plants belonging to 102 different families. Around 96 species of orchids have been identified here which are the major part of a mixed type of vegetation known as Odisha semi-evergreen forests with tropical moist broadleaf forest and tropical moist deciduous forests along with dry deciduous hill forest and high level Sal forests. The grasslands and the savannas bring grazing grounds for the herbivores and ideal hiding place for the carnivores. The forest boasts of innumerable medicinal and aromatic plants to serve as an essential source of earnings for the tribal people. Eucalyptus, are also the major floral attraction in the area which was planted by the Britishers at the then period (in 1900).

riginally being the hunting ground for the kingly rulers of Marurbhanj, Simplipal was designated a tiger reserve in the year 1956 and in May 1973 the essential part of the Project Tiger in May 1973. This is the same reserve where the famous “Mugger Crocodile Scheme” was started in 1979 and as a consequence, in the same year the Government of Odisha declared Simlipal as a wildlife sanctuary by covering an area of 2,200 square kms (850 sq mi). Further 845.70 square kms (326.53 sq mi) of area was added into it and in 1994, it was declared as a biosphere reserve. Pleasurably, in May 2009, UNESCO also added this national park to its list of Biosphere Reserves. But unfortunately, this is allocation which is yet to be declared as a full-fledged national park despite of its status of being among one of the fifteen biospheres of India; reason being, the presence of around 10,000 people living in its 61 villages that brings too many human interferences to its development. Today, Simlipal has occupied a total area of 2,750 sq kms.

Jaranda Falls – This is the most picturesque waterfall in the Simlipal National Park area to serve the visitors as a breathtaking attraction. The Jaranda falls is located at the core region of Simlipal and is smothered around by thick vegetation, cool climate with whistling winds. This is a magnificent location to make it an ideal and marvelous picnic spot for spending lucrative moments along with accompanied by the picturesque views of Mother Nature. The water currents descending at the height of 150 m to make a pool in the base for bathing under this splendid waterfall is also enhanced by the picturesque valleys and mind blogging environment.

Barheipani Falls – This is the most spectacular and eye-catching waterfall in the Simlipal reserve area where the cascading of the stream can be visualized from the height of 399m with tremendous force in an enigmatic style. Located at the backdrop of the magnificent forest of Simlipal and with inducing a scintillating pond at its base to take a soothing bath for the visitors, the Barheipani Falls is the most wonderful and awe-inspiring location for all. The ideal spot for the environment friendly tourists, this spot is the perfect mirror for the virgin beauty along the mesmerizing landscape to make a grand escape from the urban life.

Trekking – At Simlipal, not only the sight-seeing, wildlife excursion and some leisure activities bind the visitors for an energizing entertainment, but the one vehement activity can also be added in the list and that salubriously the trekking fun all around the way to the hard terrains of the Simlipal tiger reserve. The forest which is decked with undulating hilly terrains offer all grades of trekking challenges to the adventurous tourists. Natural walks, hiking and rough trekking are the other attractions in this park to enjoy the natural splendors, the exquisite ambience and breathtaking landscapes. The nearby camping facility accords for the trekkers to make necessary arrangements for such adventurous treks. to make it more interesting, the experienced guides can assist with the factual information on the trails and the dangers followed in the trails.

Other Attraction – Simlipal is the ideal location to learn and enjoy the life and culture of the tribal society of Orissa. The tourists can interact with the tribe populace and participate in their festivities and customs. The area is an acclaimed place for adventurous activities like nature walking, forest safari and trekking. The two majestic peaks Meghasani and Khairiburu add much attraction to the area to explore the Mother Nature.

Kuliana (18kms) – Located at the distance of 18 km, this is the most pictorial place, known for Paleolithic articles to get acquainted with the pre-historic eras and living. So from the archaeological point of view, this location can best fit for the people interested in the same field.

Haripur (16 Kms from the reserve) – Founded by Maharaja HariharBhanj in 1400 A.D., this is a famous spot to visit in and around the area of Simlipal. Haripur area was considered as the capital of Mayurbhanj State. The presence of Rasikaraya Temple adds more spark in its popularity. Moreover, the Radha Mohan temple is in rectangular shape and Goudiya style architecture in Jagannath temple are also the added feature of this location to make Haripur a must-see place during Simlipal tour.

Deokund (55 Km) – 55 kms away from the reserve area at a hill top, Deokund is known for the presence of a famous shrine of Diety Ambika. Religious people can make a sure shot visit to this shrine with the cascading attraction of the area at the height of 50 ft. for more lucrative advantages along with the wildlife allurements.

Baripada – This is known for the district headquarter, Baripada is a beautiful place to be recognized most at the time of a colorful festival of Chaitra Parva. In this festival a chariot journey (Rathyatra) of the diety Subhadra is carried away which is interestingly being organized and pulled by the females of the area.

Bhimakunda(162 Km) – Bhimkunda is actually an ancient reservoir which is believed to be present from the era of the Pandavas (the Dwapara Yuga). The name has been derived from an ancient legend when Bhima- one of the five pandavas took bath in a kund during their stay in Biratnagar. The name of the kund as well as the place was given after that. Located at the distance of 162 kms from the reserve area, the area also receives religious significance due to the presence of Bhaytarani River that means the river that removes fear from the mind; quite interesting and spiritual meaning behind it.

Safari in Simlipal is best identified with four vehicles organized by the jungle authority, especially for the jeep safari. An open 4WD safari vehicle is allowed and available for the visitors to check the daily game drives. The opening time of the park to visit is 01st Oct till 15th June. Besides, the jungle jeep safari, the tourists can also have the best capacitive activities to enjoy are:

By Air – The nearest airports for Simlipal are Bhubaneswar (270 km) and Kolkata (240 km). Although, a direct drive down from Kolkata is preferable as it is quite free from all the hassles and bustles of the waiting and boarding & de-boarding.

By Rail – The nearest railhead is Balasore (60 km from Baripada), being directly connected by the major trains running on the South-Eastern sector.

By Road – Baripada is the most accessible point to reach the national park which is at the distance of 270 kms from Bhubaneswar, 240 kms from Kolkata, 55 kms from Balasore and 16 kms from Pithabata. Bripada is also being considered as the entry point for the reserve which is a district headquarters of Mayurbhanj lying at the junction of NH 5 and 6. All the places are well-connected by bus services and readily available taxis and jeeps also make the area more accessible.

The high hills surround Meghasani/Tunkiburu, the highest peak in the park.[10] At an altitude of 1,165 metres (3,822 ft), followed by Khairiburu at above 1,000 metres (3,300 ft) elevation.[4] At least 12 rivers cut across the plain area. The prominent among them are Budhabalanga, Palpala Bhandan, Kharkai River and Deo.[10] This sprawling forest has many waterfalls such as Joranda/Jorodah 181 metres (594 ft) and Barheipani/Barhai that are a perpetual attraction, the later at an elevation of 217 metres (712 ft)[8] gives a panoramic view of the park. It has withstood two cyclones in 1982 and 1999 without any prominent damages

The land of the temples, Odissa is also flourished with magnanimous scenic beauty; and to appreciate that beauty amidst the natural wilderness a fabulous stay at this paradise is a must. To make us available some of the greatest residing option for special retreat, Odissa tourism has a number of forest lodges and guest houses which are being fancied with great amenities and impressive services. Besides, the presence of great hotels and resorts also make the wildlife journey more placid and salubrious. Imagine, residing at the jungle ambience under the urban facilities bring tremendous pleasure for the wildlife lovers and other leisure tourists. Find out the best names that suits your needs and your precious days spent here.

Similipal is approachable via Jashipur on NH-6 and via Baripada on NH-5 through Pithabata. The nearest rail head is Baripada connecting Rupsa on Howrah – Chennai main line and Balasore. The distance of entry points by road is as under.

By Road
NH-5 (Kolkata-Chennai) in North-East and NH-6 (Kolkata-Mumbai) in North-West side run very close to the Sanctuary.

The road distances of both the entrances are as follows:

By Air
Kolkata and Bhubaneswar are the nearest airports.