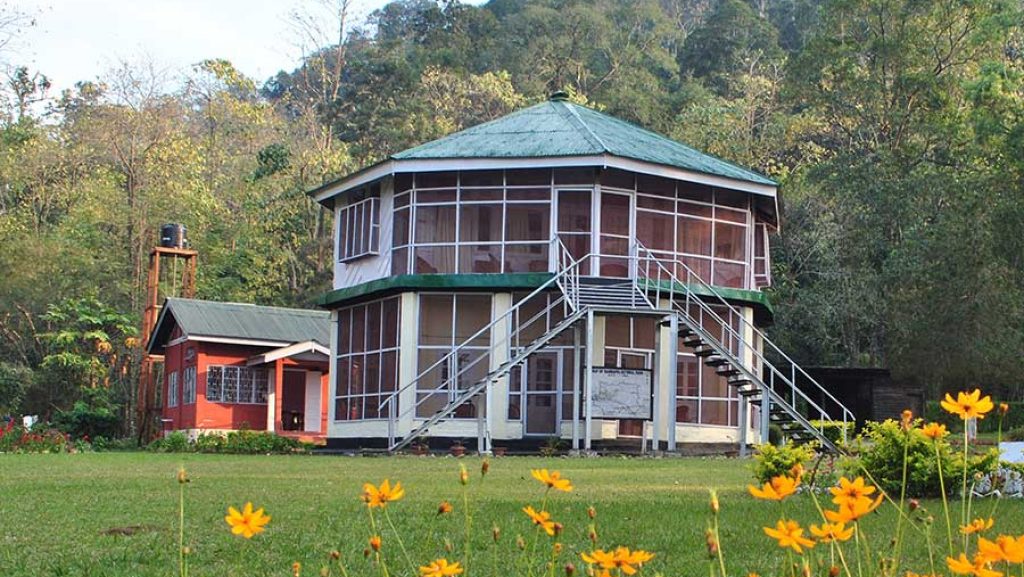 Namdapha National Park is located in the Eastern Himalayan Sub-region and is recognized as one of the richest areas in biodiversity in India. The national park is nestled between the Patkai range and Dapha bum range of Mishmi Hills.

Namdapha lies along the turbulent Noa-Dihing River at the international border between India and Myanmar. Namdapha was established as a wildlife sanctuary in 1972. It was declared a tiger reserve and national park in 1983. Total area of the park is about 1807.82 Km2.

The area is also known for extensive Dipterocarp forests among the last great remote wilderness areas of Asia. Namdapha and its adjoining areas, is flanked by the Patkai hills to the south and south-east and by the Himalaya in the north and lies close to the Indo-Myanmar-China tri-junction. The area dwells under both the Palearctic and Indo Malayan bio-geographic areas resulting in a thronging of diverse species. The park has extensive bamboo forests to complement the secondary forests.

Namdapha National Park is famous for being the only park in India to have four big cat species, like leopard, tiger, clouded leopard and snow leopard. Around 96 mammal species are found here of which 29 speciesare listed on Schedule I of the Wildlife (Protection) Act, 1972.

Perhaps no other national park in the world has a wider altitudinal variation than the Namdapha national park that rises from 200m to 4,500m in the snow-capped mountain. This variation has given rise to the growth of diverse habitats of flora and fauna.

Miao Museum – Maintained by the Namdapha park authorities, Miao Museum is located near to the Field Director’s Office. One of its rooms is selected for keeping the animal specimens collected from Namdapha and surrounding areas over the course of several surveys and decades. There are many snake and frog specimens as well as a large number of bird skins, mammal pelts and skulls. For greater interests, there is a complete skeleton of a large python mounted on the wall. A second room displays the clothing, tools and village life of the local people. The museum is open on all the working days.

Miao Mini Zoo (Miao) – The Miao zoo is situated opposite to the museum near the Field Director’s Office. Several primates found in Namdapha are housed in the zoo, including hoolock gibbons, pig-tailed macaque, Assamese macaques, stump-tailed macaque and slow loris. Small carnivores will include Himalayan palm civet and other small mammals like porcupines and leopard cats. Among the other attractions are black bears and an enclosure with a gharial. Outside the zoo is a large enclosure with sambar and barking deer.

Moti Jheel (@buffer zone) – by making a 10 mile walk of two to four hour from the forest department campsite, the tourists can find Moti Jheel. It is a small natural pool (or jheel) situated atop a plateau called Gibbon’s Land. The path to Moti Jheel is steep, but runs through beautiful deciduous and semi-evergreen forests, with moss-laden branches and trees covered in epiphytes. The path is a superb bird watching trail, where one can find specialties like the Green Cochoa and Rufous-throated Fulvetta. Gibbons, capped langur, Malayan giant squirrels and smaller squirrels can usually be sighted. During the rains, it is not uncommon to come across a mountain lizard (Japalura) or keeled box turtle. Although the pool is small and often overgrown with vegetation; but could be a good option for some kind of leisure walk.

Raja Jheel (@buffer zone) – Raja Jheel can be reached by a path bifurcating from the main path between Hornbill and Firmbase just before Rani Jheel. The jheel is about an hour’s walk from Rani Jheel. Raja Jheel is a forest swamp that is now completely overgrown with vegetation, but the main attraction is the habitats and bird life en route to the swamp. The path to Raja Jheel continues to the mountains beyond the swamp, and can be resulted in a steep and difficult route on further trailing. The tourists can avail the camping experience on the way to Raja Jheel at a small stream in a valley, which is about a twenty-minute walk from Rani Jheel.

In 1947, Mr. W. Maiklinjalm, Forest Advisor to the Governor of Assam put forth a proposal to protect this wilderness and declare it a national park. But this was ignored and during the Indo-China war, files that advised protection mysteriously disappeared. In 1969, some of these papers were recovered.

Namdapha was established as a wildlife sanctuary in 1972. It was declared a tiger reserve and national park in 1983. Total area of the park is about 1807.82 Km2

The route from Dibrugarh to Miao goes via Tinsukia, Digboi, Margherita, Ledo, Jagun, Namchik and Kharsang. The drive takes about six hours to reach the place.

The period between November and March is probably the best season to visit the park.

For best accommodative services, the government-run circuit houses and bungalows in Namdapha is the coolest option. Camping in tents at the designated campsites is also a good idea. Forest rest house, tourist lodge, tourist huts and dormitory are available for stay in Deban (26 km from Miao). Camping is usually organised and supervised by tour operators. Besides, for luxury retreats, many hotels and resorts are available at the reserve area for much specific amenities and services.

Namdapha shot into prominence during the Second World War. It lay on the famous ‘hump’ air-route from Assam to China used by the Allies to support Chian Kai Shek’s Kuo Min Tang army.

The reserve area of Namdapha first came into existence and notice to the international importance during the Second World War due to its rich biodiversity. The latter half of the war was witnessed here with several pilots being crushing at this site as a result of multiple air turbulence over the area.

The area of Namdapha also proved to be the refugee camps for many immigrants and till today. The Chakma, refugees from Bangladesh, are the recent immigrants to the area, being settled by the Indian government in the 1960s in the areas between the town of Miao and the western edge of Namdapha.