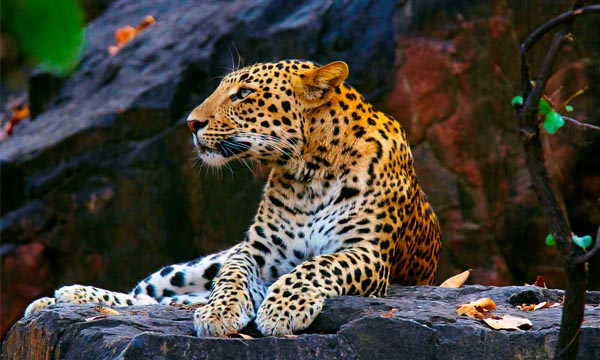 Being one of the youth brands of Global Tourism India (GTI TRAVELS PRIVATE LIMITED), we know your needs the best and thus offer you the best of your time and money for Gir National Park Tour. Under the guidance of our expert guides you will have surely a life time experience or everyone looking to fulfill their wildlife fantasies across one of most renowned wildlife sanctuary of India, we offer Gir Wild Life Tour Package. We all know, Gir is the only natural habitat of world popular Asiatic Lions. Where our tailor made Gir Wild Life Tour Package gives you an unparalleled opportunity to watch those rare Asiatic Lions coupled with thousands of other elusive wild animals and hard-to-find birds like uncommon Asiatic wild ass, hyenas, Gir foxes, pygmy woodpecker, brown fish owl and black buck etc, it will make sure that you receive the highest standards of luxury, comfort and travel. Additionally, all this is available at very competitive rates.

The entire forest area of the Gir National Park is dry and deciduous which provides best habitat for Asiatic Lions. As per the new statics of 2015, the entire Saurashtra Region is inhabited by 523 Lions and more than 300 Leopards. Apart from these two animals the park is a home to two different species of Deer. The Sambar is counted largest Indian Deer. The Gir forest is also known for the Chowsingha – the world’s only four horned antelope. The Jackal, striped Hyena and India Fox are some of the smaller carnivores found in Gir Forest.

The exotic flora of Gir National Park gives shelter to more than 200 species of birds and moreover the sanctuary has been declared an important bird area by the Indian Bird Conservation Network. Gir is also habitat of raptors like critically endangered white-backed and long-billed vultures.

Sasan Gir is blessed with more than 40 species of reptiles and amphibians. Kamleshwar – a large reservoir in the sanctuary is the best spot where Marsh Crocodile can be seen in large numbers. Park has even many species of snake including King Kobra, the Russell’s viper, Saw-scaled viper and the Krait.

Gir Interpretation Zone, Devaliya: Devaliya Safari Park is enclosed area of the Sanctuary that offers a good opportunity for visitors to experience a rustic beauty and wilderness of the area. The safari tour is conducted in a mini bus that takes visitors to another cross section of the Gir. Travelers can watch here a good variety of wildlife in just 20 to 30 minutes tour including Asiatic Lion.

this is the most requisite dam in the area being built over the Hiran River. Located inside the vicinity of Gir National Park, the Kamleshwar Dam actually serves as a lifeline of the reserve area where the tourists can find great varieties of marsh crocodiles.

this is a famous temple in the area dedicated to Lord Krishna. People make a sure shot visit to this temple where major hot springs near to the temple are the other major attraction.

The Crocodile Breeding farm near the Sasan Gir Reserve is an appealing place to learn about the breeding of the crocodiles.

Besides Africa, Gir National Park in Gujarat is the only place in the world where you can spot lions roaming free in the wild. The real discovery channel of India is situated approximately 65 Kms South East of Junagarh District. The Government notified the large geographical extent of Sasan Gir as wildlife sanctuary on 18th September, 1965 in order to conserve the Asiatic Lion. It covers total area of 1412 square kilometers of which 258 Km forms the core area of the National Park.

Indiscriminate hunting by the people of Junagarh led to their decrease in population drastically, while they were completely wiped out from the other parts of Asia. It was the kind effort of Nawabs of Junagarh who protected the queen royalty in his own private hunting grounds. Later in due course of time Department of Forest Officials came forward to protect the world’s most threatened species. From a population of approximately 20 lions in 1913, they have risen to a comfortable 523 according to 2015 census. There are 106 male, 201 female and 213 sub-adult lions in the wilderness of these four districts.

The area of Gir National Park was once the hunting ground for the Britishers during their reign in India and while hunting these great numbers of tigers and lions accompanied by several Rajas and Maharajas of the region, it was considered as the matter of great pride. It was in the year 1899, the major counts of lions decreased sharply with the affect of famine and as a result Lord Curzon cancelled his trip in Gir which was scheduled for shooting upon invitation by the nawabs of the region. The effect of famine was so great that Lord Curzon even advised the residents of the area to save the remaining lions. By the time to save the more vulnerable acts like hunting and poaching, the Government of India banned the hunting process in the area in the year 1960 and today with an approachable count of increase in lions the area is only available for photo safaris. Today the park is recognized as one of the most important protected areas in Asia due to its supported species. Gir is accustomed of unique ecosystem with diverse flora and fauna and is now considered as one of the most important protected areas in Asia due to its unsupported species. The various initiatives and efforts by the Indian Government and the NGOs brought many changes in the population of the Asiatic lions in the year. Where in 2005, the count rose to 359 and again during the April 2010, the reserve witnessed a greater rise in the count to reach by 52 as compared to 2005 ratio. The lion breeding program included the park and its surrounding area has bred about 180 lions in its captivity since its inception.

By Rail : One can travel by rail to Junagadh from Ahmadabad or Rajkot and then take a 65 km road trip on bus or taxi to Sasan Gir.

By Road : Gir National Park is 60 km from Junagadh, the most common base for making a visit, and 360 kms away from Ahmadabad. The main centre is at Sasan Gir, and has a forest guest house maintained by the park, just opposite the railway station.

The Sanctuary is open for tourism from 16th October to 15th June every year. The best time to visit the forest is any time between December and April.

For the best accommodation facility at the Sasan Gir Reserve area many impressive lodges and resorts are available to make the wildlife journey more explicit. These lodges are credited with salubrious facilities and services to make your wildlife tour enjoyable and memorable. Find the best names to make a perfect choice during your visit to Gir National Park.