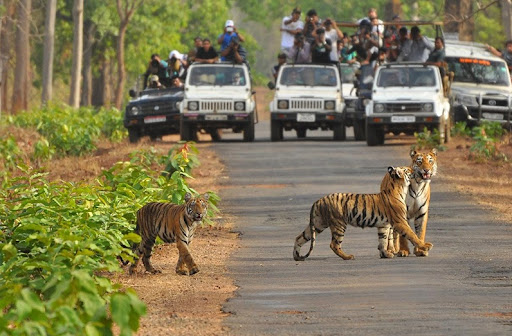 The lush forests of bamboo and sal will welcome you into nature’s lap as you enter the “brother fort”. The name “Bandhavgarh” is due to the presence of ancient fort on the mountain. It was believed that lord Rama has gifted the fort to his younger brother and hence the name Bandhav (Bother) Garh (Fort). Bandhavgarh National Park is one of the very famous parks in central India. The beauty of Bandhavgarh leaves every nature lover spellbound.

The Baghels ruled the area for long time. Later the Maharaja of Rewa declared the fort as his summer palace and the adjoining area as their hunting ground. Later hunting was banned and it was declared as protected area. Today Bandhavgarh is a popular tiger reserve and has three different zones for safari and tourism named Tala zone, Khaitauli Zone and Magadhi Zone.

Charger was a very famous tiger in Bandhavgarh. This male was huge, ferocious and usually mock charged on gypsies and hence the name. He died of old age at 17 in year 2006.

Sita a gorgeous female was favourite of many and ruled the cliffs of Bandhavgarh. These two produced beautiful litters and are also the stars of various documentaries.

Bamera , the dominant male of bandhavgarh ruled the dense forests of Sal and Bamboo. He is the largest male in Bandhavgarh. Friendly and calm this guy is every photographers pride. He is also called as Shashi.Recently injured in territory fight and old age has shook this king’s reign.

Also called as Yoshila tigress, she one of the most beautiful tigress in India. Feisty, vivacious and charming she rules the swamps and meadows of bandhavgarh. She is 10 years old and has mothered 2 litters till now.

Also called as Dhitti, she is another beautiful lady of Bandhavgarh. A powerful tigress,Feisty and a caring mother, she has mothered two litters successfully and rules the Rajbehra area of Tala and Magadhi.

Bandhavgarh National Park is a park with a rich historical past. Prior to becoming a national park, the forests around Bandhavgarh had long been maintained as a Shikargah, or game preserve, of the Maharajas and their guests.

In 1947, Rewa state was merged with Madhya Pradesh; Bandhavgarh came under the regulations of Madhya Pradesh. The Maharaja of Rewa still retained the hunting rights. No special conservation measures were taken until 1968, when the areas were constituted as a national park. Since then, numerous steps have been taken to retain Bandhavgarh National Park as an unspoilt natural habitat.

Project Tiger was constituted in 1972, and then the Wildlife Protection Act of 1972 came into force. It was realized that protection of just the 105 km2 of prime Bandhavgarh habitat was enough, so in 1982, three more ranges were reduced, namely Khitauli, Magdhi, and Kallawah were reduced to Tala range (the original Bandhavgarh National Park) to extend the area of Bandhavgarh to 448 km2. As Project tiger decreased its activities and area of influence, Bandhavgarh was taken into its folds in 1993, and a core area of 694 km2 was established including the previously named ranges and the Panpatha Sanctuary along with a buffer area of 437 km2 which was declared as the Bandhavgarh Tiger Reserve.

Pick up from Jabalpur and transfer to Bandhavgarh National Park in private car. Reach Resort and Check in and rest. After Lunch Gear up and Leave for 1st Wildlife Safari. Evening Back to Resort. Dinner. Lights off and day ends.

Fly from Delhi, Agra or Varanasi to Khajuraho and drive (7-8 hours) to Tala park entrance atBandhavgarh. Nearest airport from the park is Khajuraho. By Rail: Nearest railway station is Umaria after Katani railway station, from there it is about 40 minutes drive to Nature Heritage.

Each gate offers safari permit to the exclusive area of that range and no vehicle is allowed to interchange the zones while on safari. The entry and exit gate for the vehicle has to be same. The gypsy charges or vehicle charges are separate and one has to pay differently.

The tourists are not allowed to get down from the vehicle throughout the safari. A set of rules and regulation exists for tiger safari and the park guide is aware of that. One has to follow his instruction in order to follow the regulations.

For the gate entry one needs to produce identification documents of the tourists like passport/driving license/ pan card etc. For the foreigners the passport in original has to be shown.